With near-perfect weather and a long list of truly impressive amenities, the beautiful city of Allen, Texas is a great place to buy a home. Allen is located just twenty miles away from Dallas and is composed of around twenty-seven square miles. A must-consider destination for homebuyers looking to relocate in the prestigious Dallas-Fort Worth Metropolitan Area, Allen is home to around 89,600 residents. Among its many noteworthy features, Allen has nearly 800 acres of gorgeous parks that boast a wide variety of recreation opportunities. Among its many parks you’ll find an extreme skate park, a wakeboard park, and an exceptional handicap-accessible park. Additionally, Allen has fifty miles of scenic trails for residents to enjoy while hiking and biking, walking and jogging. Allen is also home to an award-winning golf course, seven hotels, a 7,000 seat arena and over 200 restaurants offering a variety of mouth-watering dining options.

This amazing northern suburb of Dallas also has amazing real estate options. Compared to surrounding cities, the homes for sale in Allen tend to be larger, have larger lots and boast more privacy. Homes for sale in Allen include single family homes, townhouses and condos of varying ages, sizes and architectural styles. Popular architectural styles in Allen includ mid-century modern homes, ranches, Tudors and everything in between. While there are sometimes exceptions, home for sale in Allen typically range from around $135,000 for a three bedroom home with 1,300 square feet of living space, to approximately $3.8 million for a six bedroom home boasting 11,000 square feet of living space.

If you would like more information regarding homes for sale in Allen, Texas, please do not hesitate to contact us today.Allen is a city in Collin County, Texas, a northern suburb of Dallas. As of the 2010 United States Census, the city had a total population of 84,246. The Allen area was previously home to the Caddo, Comanche, and other indigenous peoples. The first immigrants from the United States and Europe arrived in the early 1840s. The town was established by the Houston and Central Texas Railroad and named in 1872 for Ebenezer Allen, a state politician and railroad promoter. The railroad allowed sale of crops across the country before they rotted, causing a shift from the previous cattle-based agriculture. On February 22, 1878, a gang led by Sam Bass committed in Allen what is said to be Texas's first train robbery.

Single story brick home with 3 bedrooms, 2 baths and 1,564 sqft of living space. This property sits on an oversized corner lot with a 2 car garage and a 2 car covered car...

Custom Drees Home with 5 Bedrooms 2 downstairs with 2 full Baths down. Owners suite has a separate study! 3 Car garage one with Central Air and Heat. Media Room and Game ...

Immaculate home in the Rivercrest Park addition of Allen! This 4 bed, 3.1 bath gem comes with hardwood floors throughout, 2 family rooms plus a game room up, formal dinin...

Wow! The minute you will step in through that beautiful iron Front Door you will fall in love with this Absolutely Stunning Michael Marlowe home locate in a heart of pres...

Offer deadline Sunday 4.18.21 by 7:00! Just the home you have been waiting for with 5 bedrooms, 4 baths, gameroom and media room in Summerfield! Master plus secondary bed...

FALL IN LOVE with this cozy one-story traditional home nestled on a quiet interior lot in the Hillside Village subdivision. Minutes from Celebration Park, HWY 75, PGBT, &... 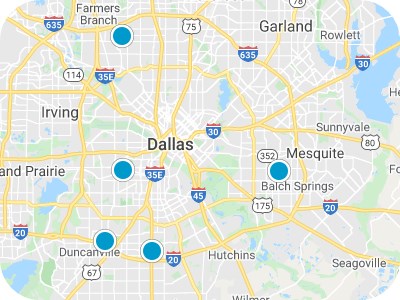